The Pandora Papers surpassed the Panama Papers as bigger research, including over 400,000 more documents and over 300 gigabytes of information.

Some of the most prominent American figures to appear on the Pandora Papers include Robert T. Brockman, billionaire, and CEO of Reynolds & Reynolds, and Republican Party donor, Jared Wheat, drug smuggler and former CEO of Hi-Tech Pharmaceuticals, Robert F. Smith, an American investor and CEO of Vista Equity Partners and other big companies such as Baker McKenzie, an American law firm and one of the worlds largest ones and Apple Inc., the American technology company.

However, this new report has a bigger story. Last time, the United States figured prominently as a source of the enormous money stored offshore or the professional skills supporting such arrangements.  This time, it also appeared as an offshore destination in its own right and Texas has a big responsibility.

The Pandora Papers revealed a slew of trusts with foreign connections in Republican-led states such as South Dakota (81), Ron DeSantis’s Florida (37), and Greg Abbott’s Texas (24). More than 200 US trusts have appeared in the Pandora papers’ data, sheltering at least one billion dollars. Texas holds one of the biggest chunks of them. 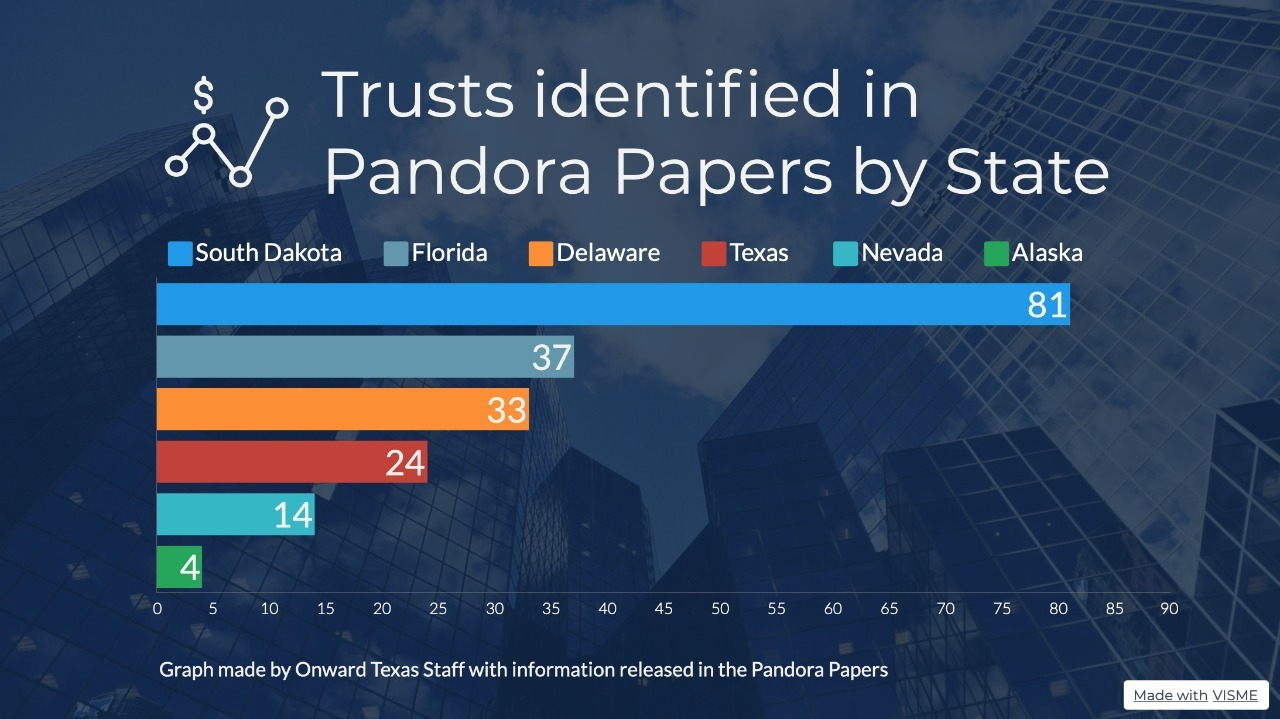 In order to internationally prevent this type of tax evasion, the Common Reporting Standard was developed in 2010 by the Organization for Economic Cooperation and Development, an intergovernmental economic organization. It requested that “jurisdictions acquire information from their financial institutions and automatically communicate that information with other jurisdictions on an annual basis.” The European Union, China, and Russia are among the more than 100 countries that have agreed to utilize the CRS. However, as Texas A&M law professor William Byrnes pointed out, the United States is not a part of it.

Under GOP governance, Texas has joined an undesirable group of states that the Pandora Papers investigation deemed that they have become “leaders” in “peddling financial secrecy”.

Most recently, Texas, with Greg Abbott’s blessing, is trying to pass legislation to cut property tax rates. It would be a $2 billion tax-cut bill. State tax code’s Chapter 313 Texas Economic Development Act offers multiple tax incentives for businesses, helping them avoid paying even when their incomes are huge. Most recently, Tesla announced they are moving to Texas, and they are set to save over $80 million dollars in the next 10 years.

It isn’t that Greg Abbott and all GOP Governors are actively promoting becoming tax havens for companies, but their reluctance to have strong fiscal regulations is incentivizing foreigners and Americans to come and abuse the law.

What do you think?

Browse and manage your votes from your Member Profile Page

Back to Top
Close Submit Your Story

Your password reset link appears to be invalid or expired.

To use social login you have to agree with the storage and handling of your data by this website. %privacy_policy%